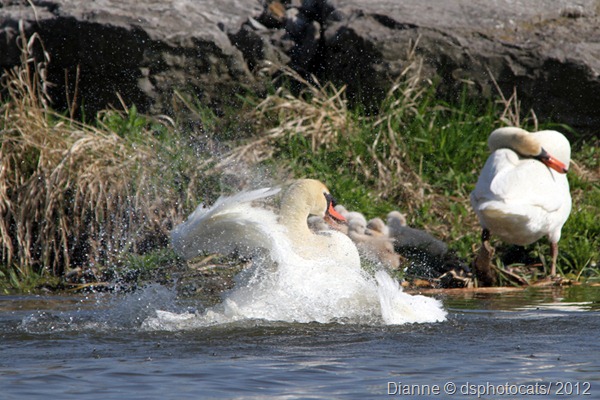 But today Mr. Cobb seems to be trying to be the Center of Attention, as he splish splashes away. 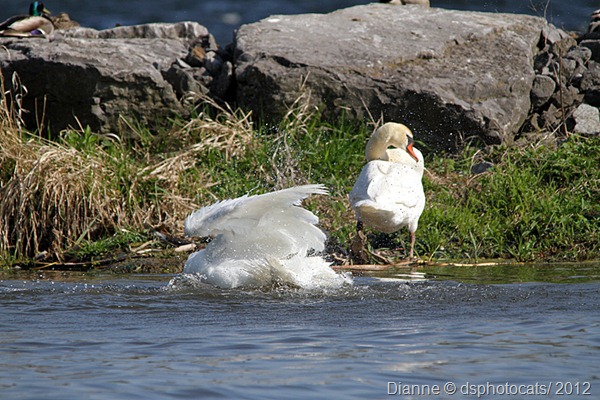 As he seems to be having some fun with his family as he takes his bath, splashing His Pen, and nine baby cygnets. Maybe he thought they needed a shower to cool themselves down on a hot day in May.

Yes I am behind once again and it is now June, and I have some catching up to do, if I can. I think he spotted me and he put on quite the show.

Mr. Cobb seemed to be in a very good mood and quite happy, and proud to be a new daddy.

I was surprised to see nine baby cygnets. That is a big family as they usually average seven to eight cygnets.

He was happy to put on a show for me as I started shooting with my Canon. I took quite a few pictures that day, and this is just a few. I did focus mostly on him because he made it very difficult not too, with all his antics. 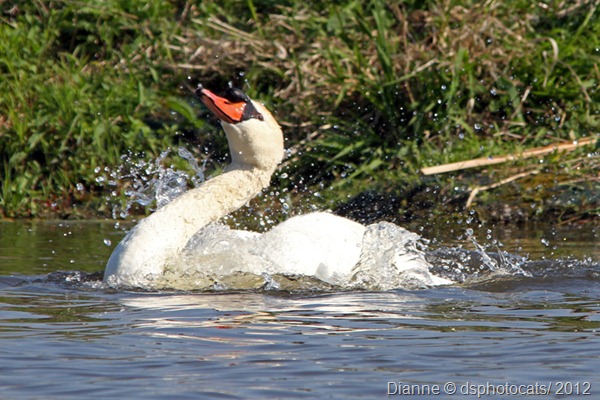 He just went back and forth in front of me, and his family, and seemed to enjoy every moment, as did I. 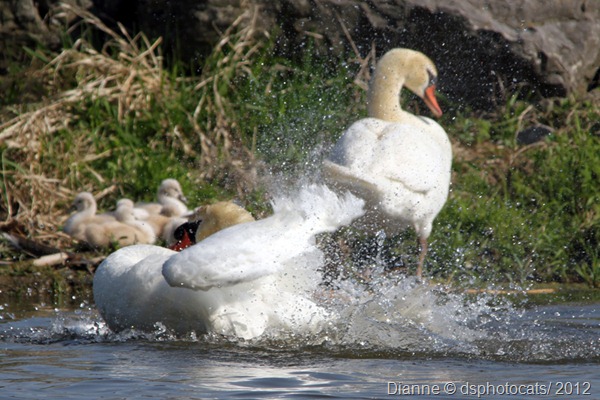 Maybe he felt the need to distract me from his family. I don’t really know. I never seen anything like it.

I couldn’t help but laugh, and smile at such a sight. 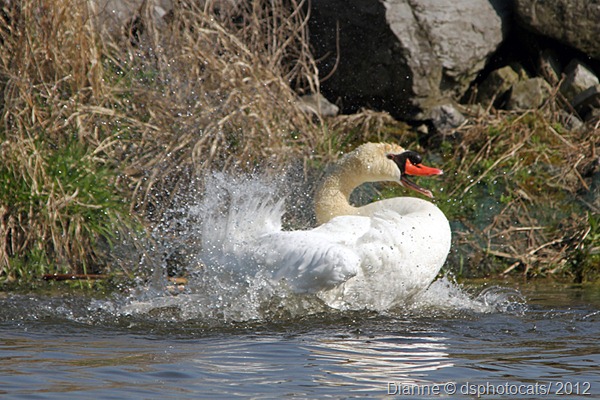 Did you ever see such a sight?

Just look at him and the expression on his face. :) 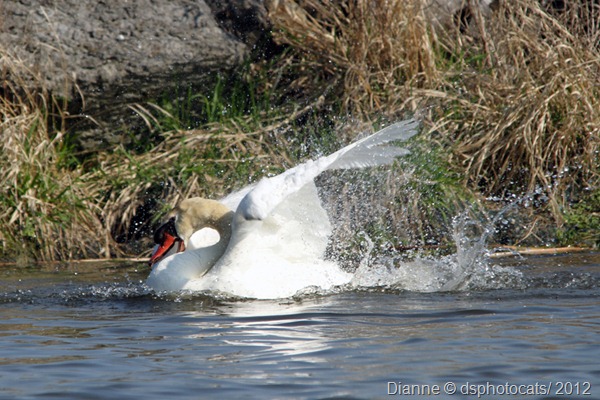 He doesn’t look to graceful here but he sure was having a good time, and so was I. 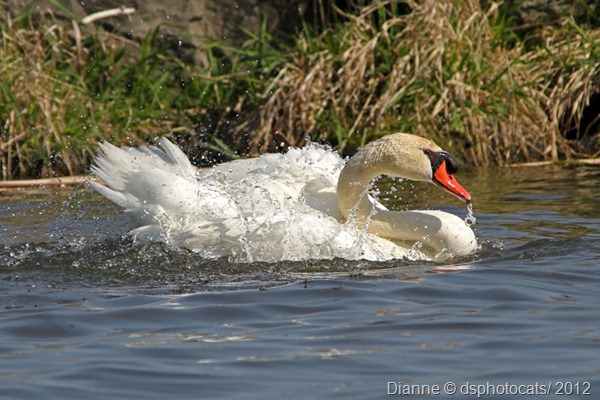 For a moment it was as if he were posing for me.

I loved how the water just rolled off of him like beads of pearls. 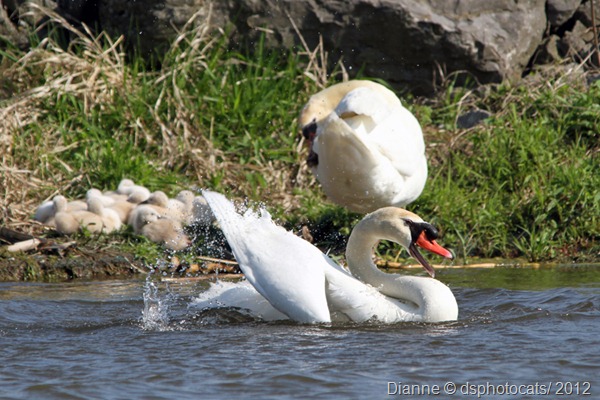 It almost looks like Pen was giving him a look,

as if to say, “Just what are you doing”?

And the Cygnets just kept preening themselves. 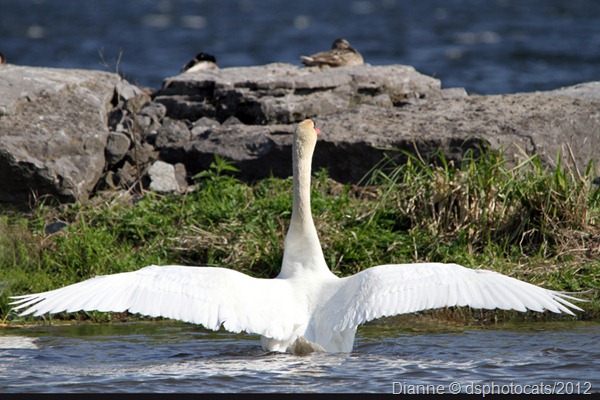 Finally he heads for shore. 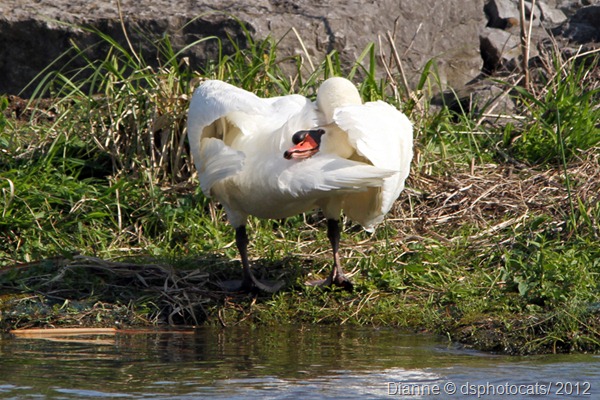 I couldn’t believe this pose! What a character!

This one really made me laugh, and it is a wonder that I didn’t have camera shake . I have never seen anything like this. 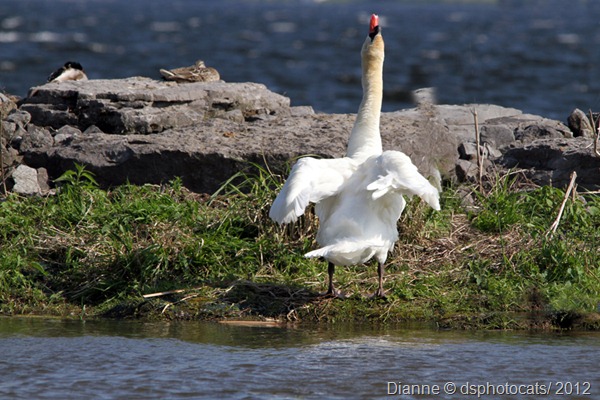 It was like he was announcing to the world that he was the luckiest dad and mate in the world.

Mr. Cobb was the “Life Of The Bay” on this fine day.

I counted it an Honor to witness such a sight. 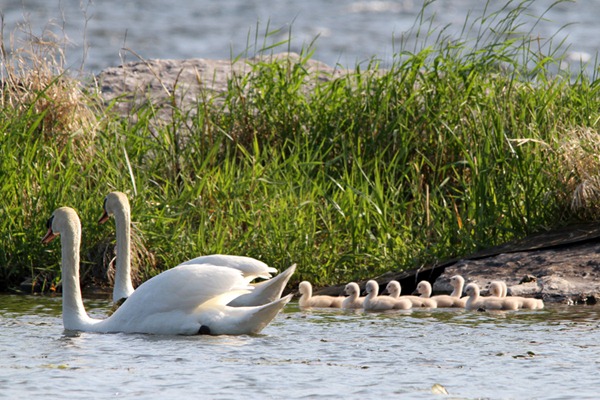 Here is a picture of the family that was taken a short time later. I did take more photos and will share them on another day.

Hope you enjoyed this introduction to this beautiful swan family.

All photos and writing by Dianne © dsphotocats