Update #4 On the Swans and Canada Geese

If you look closely you will notice the Male Swan and Male Canada Goose are both on the rock island with their mates. This is the first time I have seen all four of them coexisting on the rocks at the same time . Usually the swan doesn’t allow the male goose to be their as they are so territorial. Something is up.

I took these photos two days after the big fight on my last update, when the male goose was no longer going to be pushed around and kept from his mate.

I was there no longer than ten minutes when Mother Goose got up off the nest and headed towards the water and Father Goose is right behind her. If you look just below her you will see what appears to be baby chicks. It appears that Father Goose is checking to make sure no one is left behind in the nest. I noticed their is one out of the seven that tends to wonder on his own from time to time. There is one in every crowd. He is an adventurer. :) 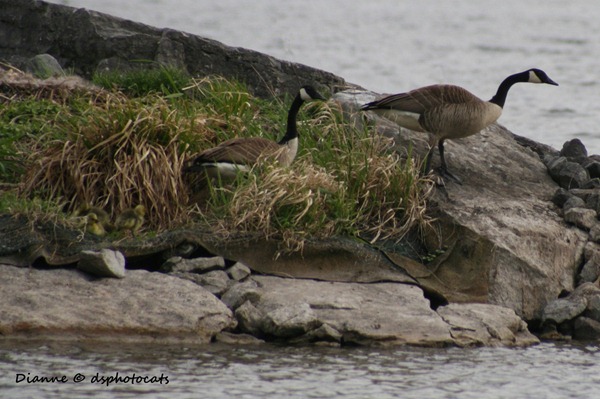 They are checking to make sure it is safe before they enter the water.

The parents are always on the watch for danger to their young chicks.

I was in awe and quite thrilled to be there watching this beautiful family of geese. I am not sure how many days old they are. I do know they were well hidden in the camouflage of the nest and under mother goose herself. 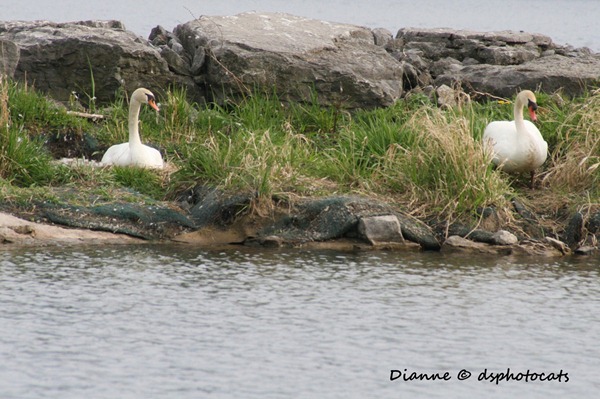 The Swans Look On

For a time the Geese Family are allowed to show off their newborn family and be on center stage.

If you look behind Father Goose you will see the little adventurer. I call him Daddy’s Boy. 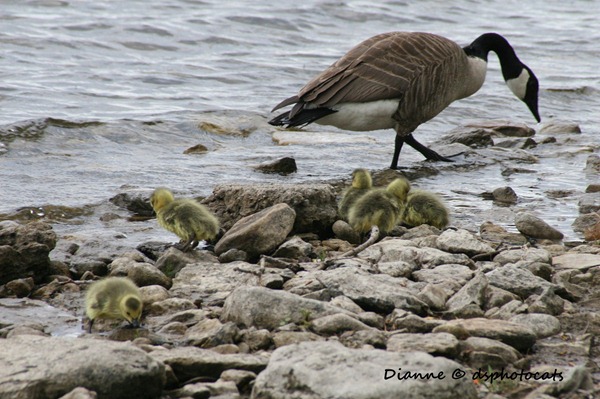 Here they are on shore . Father Goose and the other two were just out of my range. I couldn’t talk them into standing in a nice orderly fashion so I could get the perfect family portrait. They didn’t seem to mind me being within camera range though. :) 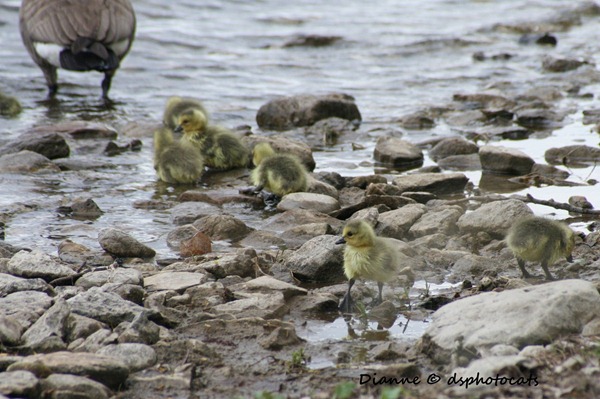 All these photos were taken with my 28- 300 lens, without my tripod. The lighting was tricky and challenging at times and I sure could have used my tripod. I had decided to ride my bike down to the Bay and check on the Nesting Moms. I was surprised to see these beautiful Baby Chicks. If I had of known I would have driven down in the van and taken my 170-500 lens.

Here we go again. Just as the family of geese were heading home to the nest the male swan had other plans. At this point I was really concerned about the geese and their safety, and so was Father Goose. Mother Goose headed back to the shore for safety. 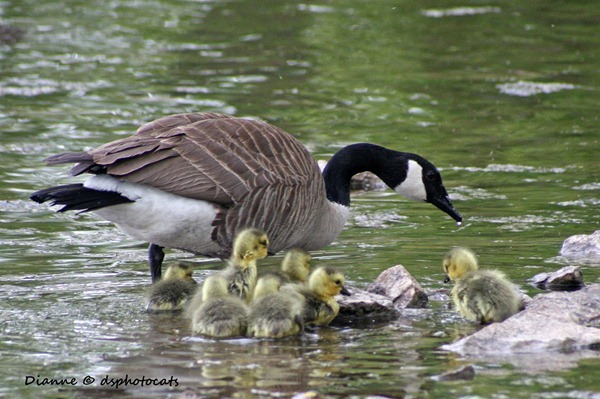 They have arrived back on shore. Now what? 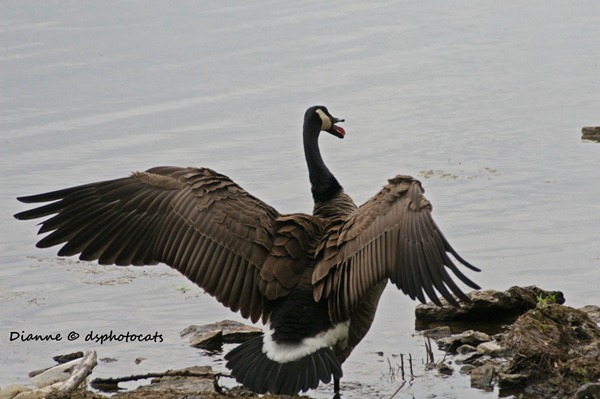 Father Goose followed his family back to shore and stood on guard. The swan came back and pushed them even further on shore. At that point both parents stood on guard as the baby chicks stood all huddled in a circle. Satisfied the swan swam back closer to his nesting mate. At this point I decided to make a mad dash home on my bike, grabbed my 170-500 lens and drove back to the Bay. By this time the male swan had gone way off for his nightly swim and the geese were back safely on the nest. I thought that was it for the night but waited a few minutes longer hoping for another look at the chicks through my lens. It appeared they were all back safe and sound in the nest with their mother keeping them warm and safe. 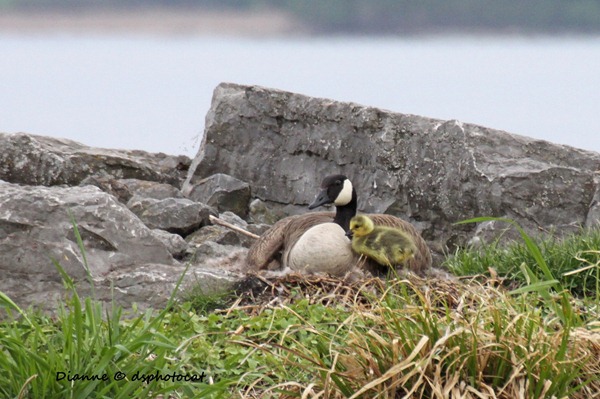 As I stood there all of a sudden this little one came up from the nest . Was it the little adventurer I do not know. I was so happy to get the opportunity to get one last shot and this was it. I believe that God decided to Bless me once again.

I went back the next morning as I didn’t have a morning client which is rare. What did I find when I got there? The family of geese had left the nest never to return. I think they moved for their safety. I looked high and low all along the Bay shore and they were no where to be found they were gone. I think they worked their way to the east side of the bay into the marshes. I do hope to see them again but will never know for sure that it is them. I hope and pray they are all safe. It was quite the adventure and I was so Blessed to be part of it and share it with all of you.

Every night after work I go down to the Bay to check on the swans and so far no sign of little baby swans. I am hoping to get the chance to photograph them also. The other night I came home from work and my dear sweet hubby had packed me my supper to take to the Bay with me. That is part of the reason I haven’t been around to visit many of you. I have been working , sleeping , eating , and a few other things plus keeping an eye and waiting for the rest of the story.

Have a Great Day!