Update On The Swans #5 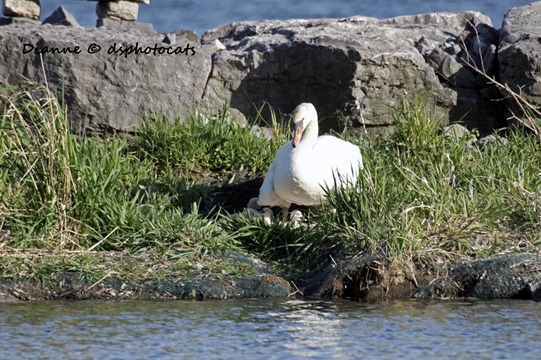 On May 19th , after working all day I came home and grabbed my camera and a packed dinner that my husband had made for me  to eat on the way to the Bay. I have been observing these swans almost every day since the beginning of April. I didn’t want to miss the arrival of the new born babies , which are called Cygnets. I got a pleasant surprise on the day before my birthday. What a wonderful birthday present this was. :) 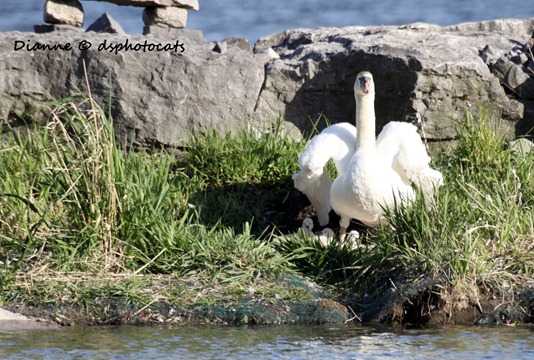 I couldn’t believe my eyes …… finally they had arrived and this was the first time they were visible to see. I am not sure when they were actually hatched as they were well hidden in the nest. They are very tiny at this point and not quite ready to leave the nest. You can’t tell in this photo but there are 8 baby swans. 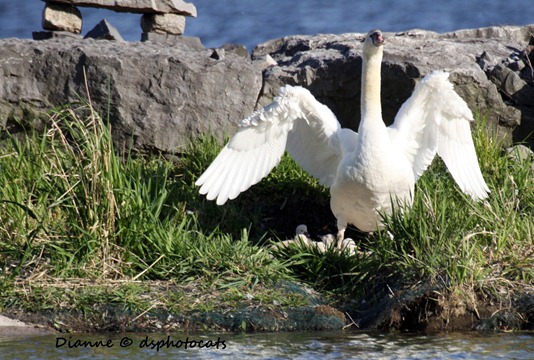 I called this photo, “The Announcement”, because it was like she was announcing the arrival of her babies, to all who were in view. These swans were and still are the center of attention by many people who walk along the water front trail. Many people came with their cameras hoping to get a few good pictures of them, just like me.

Lets not forget the geese family who also played a major role in the drama which took place from day to day. I will try to add more pic’s of them also in the near future. I am behind in my updates. I have so many photos to sort through , plus I am still going down as often as I can to keep up with their progress. 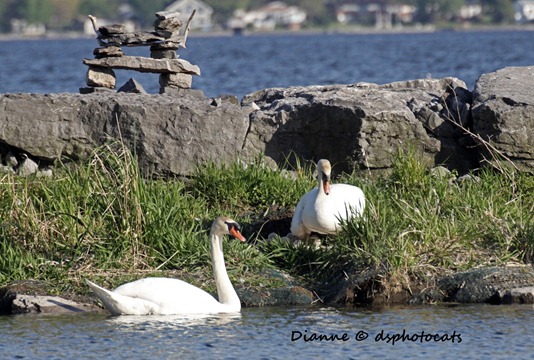 Here is the proud parents with their new family.

I have much more to show you and hope to do another update soon.

I added some interesting facts below if you are interested. I have learned so much by observing these beautiful birds and have started also to do a little web searching to learn more.  Here are a few things I learned. I hope it helps you understand the nature of the swans. Some of you may already know these facts. Well until next time, you all have a great week. Hope all is well.

► Intelligence and memory: Swans are highly intelligent and remember who has been kind to them, or not.

► Behaviour: Swans respond in kind to gentle and considerate treatment. They don’t arbitrarily attack people, and will only bite if they feel threatened. They are more aggressive during the nesting season because they need to protect their nest, eggs and babies. Nesting season usually starts in March and lasts a few months until the cygnets can launch out on their own.

► Sounds: Although they don’t have a “call” they have a remarkable assortment of sounds to convey a broad range of emotions, from a gentle ‘bleat’ through a range of puppy-like barking notes, and a head-to-tail long snort sometimes combined with head-raising and feathers fluffed, to register delight.

► How to recognize a male from a female: Male and female look alike, but if you look carefully, you can tell one from the other:

1- Males are larger than females;

2- The knob at the base of the male's upper bill is larger than the female's knob. By the way, it’s this knob that distinguishes the mute swan from all others;

► Mates for life: Swans usually mate for life, remaining together through the year, but “divorces” have been known, and if one of a pair dies, the survivor usually seeks out a new mate, and the pair remain devoted.

► Mating: Swans begin to breed between 3 and 4 years of age. It’s a special treat to see swan mates “displaying” during the mating season, gracefully touching bill-to-bill and breast-to-breast until a perfect heart shape is formed, or gently intertwining their necks.

► Eggs: They lay from 5 to 10 eggs that take from 35 to 42 days to hatch. The female does most of the egg incubation, but every now and then the male will replace her for a while so she can have a swim and a ‘bite to eat’ in the lagoon.

► Cygnets are usually pale gray with gray legs that turn black as they grow, but there is a European sub-species or variant known as the Polish Mute, where the cygnets are white, with pink legs and feet. This coloring is due to a recessive gene.

► Food: Swans eat aquatic vegetation and insects, even tiny fish and tadpoles. Because they can plunge their long neck well below the water’s surface, they’re not in competition with ducks and smaller waterfowl for food. They actually help the smaller birds when parts of plants they’re eating float to the surface.

► Neck: A mute swan’s neck has 23 vertebrae, more than any other bird.

► Lifetime: A swan in a protected environment might live as long as 30 years.

► Population: Although the North American Mute Swan population is now around 13,000, there are fewer than 1,000 in Canada, and these are divided between southern Ontario and coastal British Columbia (Source: Canadian Wildlife - Vol. 13, No. 4 - Page 22).

► A baby swan is called a "cygnet"

► A group of cygnets or eggs is called a "clutch"